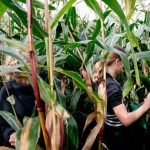 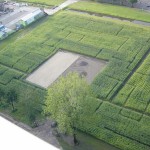 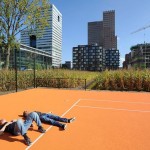 The wasteland of cluster IV Gershwin Zuidas awaits building activity that has been temporarily put to stop by the financial crisis.

Commissioned by City district Zuidas Amsterdam i.c.w. Virtueel Museum Zuidas, we have worked out a proposal for the temporary use of the grounds.

The leading motive is Time and the design is based on a growth model: the field stays in movement and is being regularly transformed according to user needs and developments of the area.

For three years the landscape shall transform itself into a place with its own identity: it would become an unusual place in the Netherlands, a mountain landscape – the Zuidas Mountains.

The growth of the area begins immediately: with sowing of a field of corn, organically grown, on the most expensive land in the city in between the reflective skyscrapers of the futuristic Zuidas.

Next, a watchtower is placed in the field, it will invite people to walk through the field and create paths – so a labyrinth comes to existence and the routes will be determined.

Along these paths, the mountains and the rocks arise successively. The layered landscape contains functional units. In the spring, the changes in the field can be realized by shifting some units and paths and by creating open areas.

Every three months, an artwork shall be added to the site, in contrast to the rocks these will be the shape and color beacons. The trees, grass and plants complete the pattern of paths and places.

For three years the landscape would grow. The aim is a balance between nature, culture and functionality.